Posted on March 25, 2015 by BayAreaRealEstate

Rather appropriately located on Actors Colony Road in North Haven, Richard Gere‘s house, Strongheart Manor, was built in 1902. It’s been renovated and expanded since then, with two additional guest houses, an outdoor fireplace pavilion, and of course a tea house set in the middle of a pond in front of the coastline. In all, there are twelve bedrooms and twelve baths in 12,000sf set on 6.3 waterfront acres. $65M seems like an ambitious price for a fairly unpretentious but very nice house. 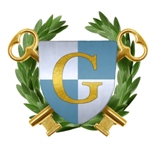