Posted on October 30, 2017 by BayAreaRealEstate

Azucar Lounge
One of the best taco deals in town hits this SoMa spot on Tuesdays, where $12 gets you either unlimited carne asada or unlimited vegetable tacos — with the hope that you’ll wash them down with a couple of the bar’s cocktails, or their frozen margaritas. The vegetarian option is nothing to scoff at either — see the photo above, these are the “papa con rajas” tacos with potato, poblano pepper, queso fresco, and pico de gallo. Normally, a plate of two tacos here costs $8 or $9, so this is, in fact, a steal for people with big taco appetites. And it’s a downright bargain as a night out, so long as you keep it to one drink — where else in 2017 SF can you get an all-you-can eat dinner and a drink for under $25? — Jay Barmann
299 9th Street at Folsom

Bar San Pancho
Even though Bar San Pancho is a spin-off of Tacolicious, their Taco Tuesday deal is nothing like Tacolicious’. For one thing these are crispy tacos, whereas Tacolicious serves them on soft tortillas. Further, Bar San Pancho’s Taco Tuesday is a true, old-school $1 per taco arrangement, and allows the full beef, chicken, or pork range of choices. And the dollar taco action lasts all the way til closing time at 2 a.m. (or in San Francisco terms, “whenever the bartender decides it’s time to close, which is often well before 2 a.m.) — Joe Kukura
3198 16th Street between Albion Street and Guerrero Street

Celia’s By The Beach
Longtime San Franciscans likely remember the former Celia’s #1 as a well weathered, sit-down Mexican place favored mostly by locals. But as the Outer Sunset has heated up, so has Celia’s, where even on weeknights guests might face a wait for a table. Their Taco Tuesday is even more packed — though the specials are served only in their bar/lounge area, revelers often spill over into the dining area. In terms of specials, you’re looking at three tacos for $3-6 depending on the contents (avocado being the priciest). Drink specials include their generous house margarita for $4 and $2 Coronas. — Eve Batey
4019 Judah Street between 45th and 46th

Eastside Westside Restaurant & Bar
The tacos are every bit as Caucasiannally prepared and served as you’d expect from a posh Marina eatery and craft cocktail establishment. But some of you like that kind of thing! And honestly people, that is a really solid $2 taco, and is available at Eastside Westside’s Taco Tuesday from 4-10 p.m. weekly, along with $2 Modelos, $3 Micheladas, and $5 margaritas. — Joe Kukura
3154 Fillmore Street between Pixley Street and Greenwich Street

El Gran Taco Loco
It’s pretty inspiring that El Gran Taco Loco has managed to resurrect, relocate, and reopen following the 29th and Mission Street fire of June 2016 that destroyed their storefront along with the Mission Cole Hardware. You’ll now find them in the Outer Mission at the former Taqueria Menudo space, and they celebrate Taco Tuesday on both Tuesdays and Thursdays! The tacos are $2 apiece on said weekdays, and you don’t have carne asada included as a meat option. But you can choose any of the other meats, including lengua, at the new location just outside of La Lengua.— Joe Kukura
4591 Mission Street between Brazil Street and Excelsior Avenue 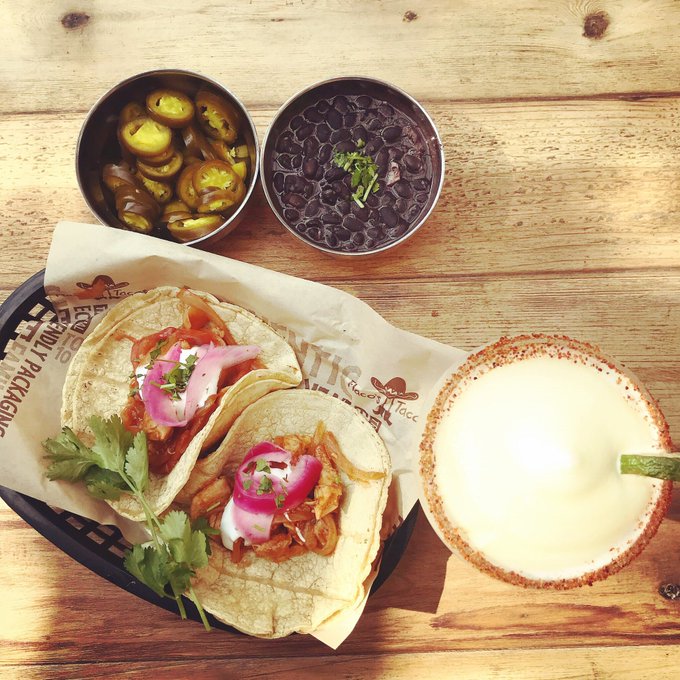 Flaco’s
Important distinction to make: Flaco’s has a Taquito Tuesday and a Taco Thursday. On top of that, they have a Huarache Wednesday, so you know they’re all about the deals, but more importantly, they’re all about good vegan/vegetarian Mexican food. So if you’re looking for what they call a more “plant-based meal,” then this is one of your best bets. — Jessica Lachenal
3031 Adeline St, Berkeley

Fritas Tacos
Anyone who’s spent time in San Diego will deem Fritas Tacos as the only true Taco Tuesday in San Francisco — one dollar, and with a seafood option. Well, the dollar taco is a shrimp taco rather than a fish taco, and chicken tacos are $2. But these Chula Vista natives that run Fritas are the only ones attempting a San Diego-style Taco Tuesday, between 6-8 p.m. on Tuesday nights, at their Mission location inside the Wooden Nickel bar (formerly Truck). — Joe Kukura
1900 Folsom Street between 15th Street and 16th Street

Los Moles
Buckle in: this one’s going to take some explaining. Up in Berkeley, Los Moles offers an all-you-can-eat Taco Tuesday buffet. They’ve got just about every type of taco meat you’re looking for, plus some nice salad options (you know, to offset your imminent taco gorging). Trick is, seating is reserved for that buffet, so you can’t exactly just drop in for the deal. Still, the admittedly minor bureaucratic hassle of reservations pales in comparison to all-you-can-eat tacos, y’all. — Jessica Lachenal
1320 65th St, Emeryville

Nick’s Crispy Tacos
Perhaps you’ve heard tell of the legend of Nick’s Crispy Tacos, but basically it started as a pop-up taqueria (before anyone even used the term “pop-up”) back in 2002 inside Rouge nightclub at Polk and Broadway. Rouge got in trouble for not serving food, which was a requirement of their liquor license, and in walked chef Nick Fasanella, who at the time had been bartending up the street at Pesce (RIP). As Fasanella explained in this 2009 interview, he essentially ripped off La Taqueria’s invention of a crispy-shell taco wrapped in a soft tortilla and topped with cheese and guacamole, which became “Nick’s Way” on the menu and, thus, Nick’s Crispy Tacos. Fast forward a few years, and Fasanella has a falling out with his partner in the taqueria, who ended up taking over the operation without him, keeping the name, and keeping the Nick’s Way option on the menu, with Fasanella then off to found the Taco Shop at Underdogs and Tacko (both of which are also on this list). Long story short, Nick is no longer at Nick’s, and the Nick’s Way tacos aren’t part of their Taco Tuesday deal, but the deal does get you two good-sized soft tacos for $7, and you can also opt to get two Coronas or Dos Equis for $7 as well. A cheaper date you will not find. — Jay Barmann
Inside Rouge, 1500 Broadway at Polk

Park Chalet
Guests who visit Park Chalet between 3 p.m. and 9 p.m. on Tuesdays can order off their special Taco Tuesday menu, which includes items like a $9 nacho dish and chicken, pork, beef, or fish tacos for $3.50. Their $7 Taco Tuesday margarita is as strong as they come and pints of their house-brewed beers are $4 all night long. — Eve Batey
1000 Great Highway in Golden Gate Park

Rubio’s
Sure, Rubio’s is a sterile chain, but it’s hard to argue with a Taco Tuesday deal, and this is one of the few that includes fish as an option. Sometimes you just feel like a nice fish taco, and if you’re over in Emeryville catching a movie on Bay Street, or down by Embarcadero Center any given Tuesday, then give Rubio’s a shot. After 2:30 p.m. on Tuesdays, they offer their fish taco for $1.75, plus what they call an “especial” version (read: super taco) with guac, cheese, cilantro, and onion for $2.00. Additionally, their street tacos can be had for $2 as well. The Emeryville Rubio’s also serves alcohol, which, on Taco Tuesday, is a buck cheaper. So, you know, go ahead and splurge on some fish tacos, grab some beer or wine, and wander through one of the Bay’s last remaining Barnes & Nobles. — Jessica Lachenal
5614 Bay Street, Emeryville

Tacko
Nick Fasanella’s ode to Nantucket and tacos has both tacos and lobster rolls on the menu [as well as burritos in four styles: California (french fries in place of rice), Mission-style, San Diego-Style (no rice or beans, with guac), or Mexican (pinto beans, no rice]. Over in Cow Hollow, thus, you can get the double-tortilla (soft and crisp) wrapped tacos topped with cheese and guacamole known as “Nick’s Way” (see the Nick’s Crispy Tacos story above for the origin), which also can be found in the Sunset at the Taco Shop at Underdogs. But the Taco Tuesday deal is only for Fasanella’s street tacos (pictured above), the traditional kind on small corn tortillas, which are normally $7.75 for three, and on Tuesday they’re $2 each. Plus, they have Tecates for $2, so you can get and out for $10 plus tax, no problem. — Jay Barmann
3115 Fillmore Street at Filbert

Tacolicious
You would expect a taco-centrically named institution like Tacolicious to be running a Taco Tuesday, and indeed they do at all four San Francisco locations (plus two more down the Peninsula). Their $15 Taco Tuesday deal nets you essentially what you see above — except only one row of tacos, albeit a row that contains six tacos rather than five. Your only option for this Taco Tuesday special is beef tacos, so fans of Tacolicious’ famed butternut squash and fried avocado tacos should realize those are not options. But at six for $15, these tacos are marked down by 50 percent of their everyday price which is a more generous discount than most Taco Tuesdays offer.
— Joe Kukura
Various Bay Area locations

Tacos Club
The only real Taco Tuesday deal in the Castro, despite this not being the only taqueria nearby, is at Tacos Club, where they make tacos in a couple different sizes and — you guessed it — only the small street tacos are part of the deal. But the meat here is damn tasty, especially the al pastor, and a deal’s a deal! The tacos de plazas, normally $2.65 each, get marked down to $2, and come topped with tomatillo salsa, onions, and cilantro. Meanwhile, the owners here opened up another restaurant catty-corner across Market Street called Castro Republic which also has a taco menu, and they do their taco deal on Wednesdays, FYI. — Jay Barmann
2324 Market Street near Noe/16th

Taco Shop at Underdogs
From 5 p.m. to midnight on Tuesdays, guests at Outer Sunset sports bar/surfer Mexican joint can enjoy $2 street (read: small) tacos and $3 cans of Tecate (the same as affiliate shop Tacko). Your taco options include carne asada, carnitas, pollo, chorizo or veggies, topped with cilantro and onions on a petite corn tortilla. At some point in the recent past SF Weekly named them SF’s best Taco Tuesday, making this event officially alt-weekly approved. — Eve Batey
1824 Irving Street between 19th and 20th Avenues

https://www.instagram.com/p/BaFZuudDeOm/embed/captioned/?cr=1&v=7&wp=638#%7B%22ci%22%3A1%2C%22os%22%3A891.7250000000001%7DTamarindo Antojeria
Over in Old Oakland, Tamarindo Antojeria offers a solid Taco Tuesday deal, served alongside some pretty nice cocktails. They offer $2 tacos and margarita specials, but you can only get those deals if you’re sitting in the lounge. Many reviewers note that the Taco Tuesday tacos are cash only, so come correct.
468 8th Street, Oakland