Your Own Private Wyoming! Epic Ranch in Jackson, WY $35Mil

Posted on January 29, 2020 by BayAreaRealEstate

A 226-acre ranch in Jackson, WY, that includes a recently completed “architectural masterpiece” hit the market with an asking price of $35 million. Formerly known as Puzzleface Ranch, the property was purchased in 2010 for $7.8 million, which represented a huge price cut. The property originally landed on the market in 2006 for $25 million, according to local news reports

Although the home was just finished and built exactly to his specifications, Ryan has moved out of state for work reasons and placed the property on the market. 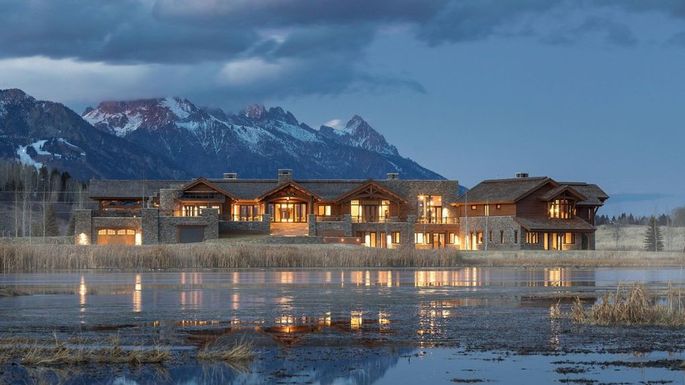 With seven bedrooms and 11 bathrooms, the huge layout features nine fireplaces, an elevator, a four-car garage, and multiple patios. Floor-to-ceiling windows allow for abundant light and bring the natural beauty of the outdoors inside.With so much indoor and outdoor space, “It’s almost like a country club,” Evans says. “It’s a building where you can entertain many, many people.” Other luxe features include a movie theater, wine cellar, gym, large kitchen, and living room centered around a glass wood-burning fireplace.Each of the three bedroom suites includes two baths and a private living area. The finished basement boasts a wet bar. Smart home features allow for remote operation of heating, lights, and drapes. The spread also includes a caretaker’s home, two barns, a workshop, and a toolshed. Two additional adjoining parcels include a three-bedroom guesthouse and an “unimproved building site.” The grounds offer wide-open spaces with ponds, a variety of wildlife, and Grand Teton and Snake River Range views.

Property is being offered through Sotherby’s

← The 15 healthiest cities to live in the US in 2020
$115 million Opulent Malibu Beach Home with an 18-foot crystal chandelier and its own beach. Here’s a look inside. →